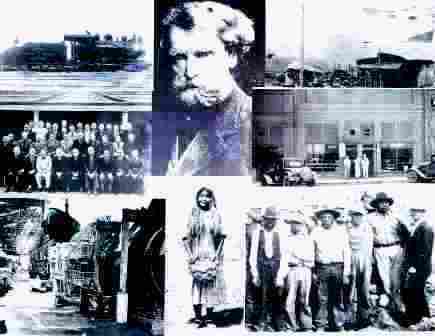 The Town of Clarkdale, Arizona is located on the banks of the Verde River in the north central part of Arizona. It is a thriving community and is the gateway to the Sycamore Canyon Wilderness Area in the beautiful Verde Valley. Founded in 1912, Clarkdale is renowned as the first master planned community in the State of Arizona.

Originally a "company town", Clarkdale was founded by the United Verde Copper Company to provide housing and services for the employees of their copper smelter. The extensive smelter complex was located near the Verde River and processed copper ore that was brought down from the mines in Jerome from 1913 to 1953.

Unlike other company towns of the period that grew haphazardly, Clarkdale was designed and built from a unified master plan. The main town site was located on a ridge overlooking the industrial smelter complex and was developed with residential homes, including upper and lower-income housing, a commercial area, an administrative center, schools, recreational and cultural facilities, and parks. They intended to include all the parts typically found in a small town within a comprehensive planned design. Today, the original townsite of Clarkdale is recognized as a Historic District on the National Register of Historic Places.

Clarkdale remains a model of good urban planning today. The estimated population in 2019 was 4,354. The original rail line that served the smelter is now host to a scenic excursion train, the Verde Canyon Railroad, which allows travelers a four-hour round trip to view the protected ecosystem of the Sycamore Canyon Wilderness Area and Verde River firsthand. In addition to the excursion branch, the Arizona Central Railroad (the parent company of the Verde Canyon Railroad) ships materials by rail to Salt River Materials Group, a local cement manufacturer.

Clarkdale's Historic Downtown Business District boasts many treasured historic assets and is the center of Clarkdale's government, cultural, and historic core. The Town and the business owners in the downtown area have invested heavily to keep the town core thriving. Approximately $1.5 million in streetscape improvements in the Downtown Business District were completed in March 2005. The Clarkdale Historical Society and Museum and an Information Center are open in the downtown district.

The Verde River bisects the north portion of the town at a low elevation of around 3,300 feet. The west side of the town boundary is located along the foothills of Mingus Mountain in the Black Hills Range at a high elevation of approximately 4,600 feet above sea level.

On the northeast border of Clarkdale, the National Park Service operates the 42-acre Tuzigoot National Monument, an 800 year old Sinagua pueblo, which is surrounded by hiking trails and hosts a complete museum. Tavasci Marsh borders Tuzigoot National Monument and has been designated as an Important Birding Area by the North American Audubon Society. Arizona state parks also manages the Tuzigoot River Access Point along the Verde River in Clarkdale.

Incorporated in 1957, Clarkdale operates under the Council-Manager form of government, with an elected Mayor and four Council Members who serve in office for 4-year, staggered terms. Citizen volunteers serve on various Boards and Commissions and all citizens are encouraged to actively engage in community issues.

The first mining claims in Jerome were filed in 1876 by several Irish men and women. In 1880, a consultant for Phelps Dodge Corporation came through Jerome and inspected the claims and decided it was not a good investment at that time. Seven years later, in 1887, the consultant revisited the mines and realized their great potential. When Phelps Dodge clients gave up the option to invest in the Jerome mines, William A. Clark of Montana stepped forward and picked it up.

Mr. Clark had the money to develop the United Verde Copper Company into one of the largest copper mines in the world. The ore was rich and the market was ripe. But, the unique ore body led to problems with the mine and forced changes in the plant facilities. Clark decided to mine the ore by the open pit method, which necessitated the relocation of the smelter and mine buildings.

Early planning for land acquisition and the siting of the smelter and town was done quietly. Many properties near the Verde River and in the immediate foothills surrounding Jerome came under the control of the United Verde Copper Company or one of its subsidiaries. In 1913, United Verde transferred almost 1200 acres of land to the Clarkdale Improvement Company.

Development of a "Planned Community"

William Andrews Clark was a man with three great ambitions in his lifetime. One of those ambitions was to own a town that would be one of the most modern mining towns in the world. Clarkdale, a town which bore his name, would be such a town. The town was designed to have every possible convenience. There were telephones, telegraph, sewer and electrical services and fine spring water. There were wide streets, buildings for all types of businesses and professionals, and subsidized homes.

Construction on the smelter began in 1912, and simultaneously the building of temporary structures began to house a store and a post office. Later, three streets of homes were built for the accommodation of those who sought low-cost living quarters. This area was known as Patio Town (much later as Patio Park Subdivision). The rest of the Town was divided into two sections that were designated as Clarkdale East and Clarkdale West, but are known only as Lower and Upper Town. The first single dwellings for employees were built along the streets close to Bitter Creek.

In laying out the streets of the town, names were sought which would aid newcomers or visitors in finding places. Main Street divides the town, running west from the river. In naming the parallel streets, the Salt Lake City method was adopted. Examples are First North Street, First South Street, Second North Street, and so on. Certain sections of the town were set aside for those who preferred to build their own residences. No lots were sold, but were leased. One such section was known as "Standard Oil Town" because it was near the Standard Oil storage plant. The community of Centerville, south of Clarkdale, but really a suburb of that time, was on ground not owned by the United Verde. Another small group of houses was called "Butcherville" because employees of the town's meat market lived there.

The first construction in the main section of lower town was a two-story hotel that was built to accommodate employees; then dwellings were built. In 1914, construction began in upper town. A business block was built, with accommodations including two-story buildings, for ten businesses and offices. This is between Ninth and Tenth Streets on the south side of Main Street. The building of residences in upper town also began in 1914. Placement of the homes was alternated; each block has three smaller homes between two larger homes. Over one hundred years later, these houses sit solid and firm.

In the mid-1930s, after the death of several members of the Clark family, Phelps Dodge Mining Corporation had the opportunity to buy the United Verde operation. Phelps Dodge operated the business from 1935 through 1953; both the company and the town were run differently than they had been before. After 1953, Clarkdale was bought and sold by several different companies. The citizens of Clarkdale became dissatisfied with the various companies and management of the town and set about incorporating in mid-1957. The Clarkdale Community Betterment Association was formed to promote incorporation. The Yavapai County Board of Supervisors approved incorporation on July 1, 1957, when 86% of the real property owners requested it.

The new government encouraged industry and population growth. In the Fall of 1959, the Phoenix Cement Company began operation west of Clarkdale. People moved into Clarkdale, buying the practically abandoned houses in Lower Town and remodeling them. Long-time residents were invited to purchase their homes, for as little $2,500.

Others bought houses for investment purposes. Since the construction of the historic areas of the Town, several new areas of the Town have been developed. Subdivisions such as Black Hills I and II, Verde Palisades, Foothills Terrace, Mingus View Estates, Haskell Springs, Mingus Shadows, and numerous individual home sites in unsubdivided areas have added to the population of the town.

The Town of Clarkdale offers a free brochure which allows visitors to take themselves on a walking tour of the historic sites of Clarkdale, including buildings constructed in the 1920's by the mining company which founded the town. The brochure is available at the Clark Memorial Library, 39 N Ninth Street.

Learn more information on the Clarkdale Historical Society and Museum.